Surrey Wildlife Trust calls for no campfires, barbeques, cigarettes or litter on heathlands at any time

Surrey Wildlife Trust warns of very high and continuing risk of wildfire on Surrey’s precious heathlands. The wildfire which took hold on Friday 7th August on Sunningdale golf course and, due to strong winds, spread to Chobham Common, destroyed 30 hectares or 74 acres of rare and precious lowland heathland and wildlife habitat on the common alone. The wildfire is still being controlled by fire crews as hot spots reignite.

Chobham Common, the largest National Nature Reserve in the south east of England, is a fragment of previously extensive lowland heathland which is rarer than tropical rainforest and is home to specialist reptiles, protected ground nesting birds and thousands of species of insects which are in decline elsewhere.

When the wildfire jumped the Sunningdale to Chobham Road and reached Chobham Common, the incredible work of Surrey Fire and Rescue and Surrey Wildlife Trust’s firebreaks, where vegetation is closely managed, helped to contain the fire and protect the remaining 500 hectares of the Common. 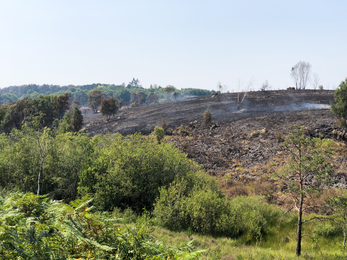 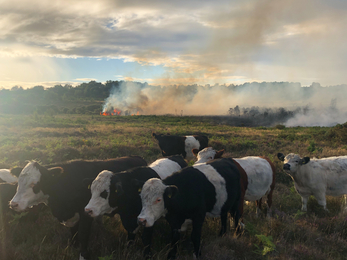 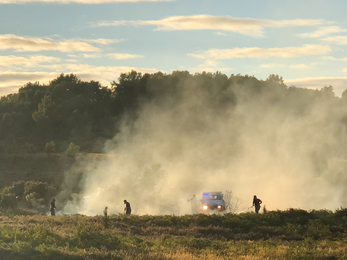 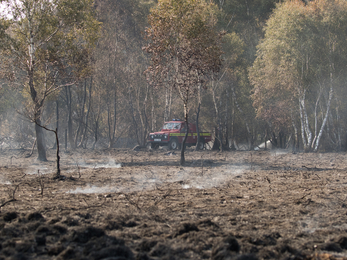 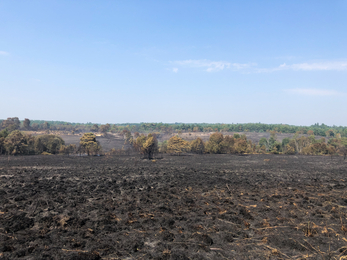 Wildfires are unpredictable, dangerous and particularly damaging to precious habitat, which has taken years of management to get into optimum condition

James Adler, Director of Biodiversity at Surrey Wildlife Trust, said: ‘All Surrey heathland sites are highly vulnerable to heath fires at present. We are very concerned that climate change is leading to an increase in frequency of wildfires, which present a danger to human life, people’s homes as well as wildlife. We hope to work closely with government and other landowners to develop a climate focused adaptation programme, where the risk of wildfire is reduced through a landscape management approach.

“Wildfires are unpredictable, dangerous and particularly damaging to precious habitat, which has taken years of management to get into optimum condition for reptiles, such as, Adders and Sand lizards, as well as Woodlarks and Dartford warblers and thousands of invertebrate species. When these habitats are destroyed by wildfire, it may take many years before the area becomes suitable for them again. If a fire is too big it can wipe out whole populations of species and, due to fragmentation of habitats, it may not be possible for recolonisation to occur.’

Normally at this time of year Chobham Common is a sea of pink and purple heather, buzzing with a kaleidoscope of 29 species of butterfly, including the rare Silver-studded blue. There are 22 types of dragonfly which hover and dart above the heathland pools. One hundred different bird species have been recorded here, including the ground nesting Nightjar which migrates 4,000 miles annually from sub-Saharan Africa to breed on Chobham Common.

There are 300 species of wildflowers, including the sweeping of purple flowering heather, several species of native orchids and the wetlands’ insect-eating Sundews and rare Marsh gentians. Chobham Common is also one of the best British sites for insects, spiders, ladybirds, bees and wasps. There are also 25 species of mammal here.

People should continue to follow fire service advice and ideally stay south of the M3. Monument and Roundabout car parks are both still closed, while Longcross car park is open. Surrey Wildlife Trust calls for no campfires, barbeques, cigarettes or litter on heathlands at any time.

The call of the wild

The call of the wild:
New collection of writing spotlights urgent need for wildlife recovery