Surrey Wildlife Trust has rediscovered one of the largest and most endangered British spiders on a Ministry of Defence (MOD) training area in Surrey, after more than 20 years without a UK sighting.

The Great Fox-Spider is Red-listed as ‘Critically Endangered’ and was feared to no longer exist in the UK as it had only ever been found at three sites, two in Dorset and the other in Surrey, but hadn’t been seen since 1999.

Great Fox-Spiders are ground dwelling and largely nocturnal but Mike Waite, spider enthusiast at Surrey Wildlife Trust, had never given up hope that he might find the monster spider. He spent many hours of late night searching with a torch over the last two years. Finally he discovered some unidentifiable immature spiderlings, on MOD land managed by the Amphibian and Reptile Conservation Trust, and then, at last several mature males and one female Great Fox-Spider, which was 55mm or just over two inches in diameter including its hairy, spiny legs. 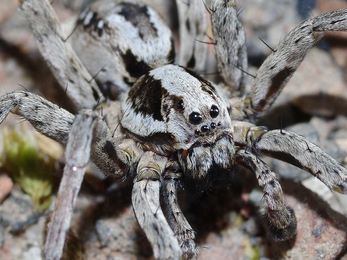 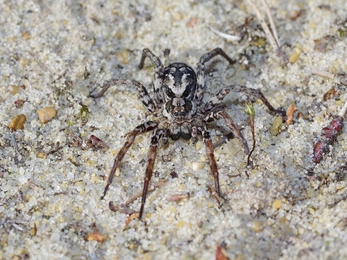 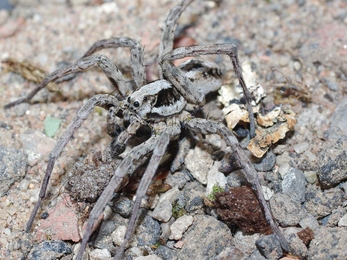 With excellent eyesight, camouflage and speed, the Great Fox-Spider Alopecosa fabrilis is one of the largest of the Wolf-Spider Lycosidae family of spiders. An opportunistic predator which hunts at night it is named for its wolf-like habit of chasing down its prey, across sandy terrain, over gravel and rocks before pouncing and capturing insects on the run.

Not only incredibly agile and fast running, Great Fox-Spiders have excellent eyesight with wrap-around vision provided by eight black eyes on its head, or cephalothorax. Two large eyes glint from the top of the head; two large eyes stare out the front; and four smaller eyes form a row just above the spider’s mouth. Great Fox-Spiders immobilize their prey, including insects such as beetles, ants and smaller spiders, by injecting them with venom, which liquifies the internal organs of the insect. The spider is then ready to feast on its catch using its strong, fang-bearing front appendages called chelicerae.

"The prefix ‘Great’ doesn’t seem to do it justice, maybe it should be the Fabulous, or Fantastic Fox-Spider. Even if the back story of its rarity and its rediscovery wasn’t taken into count, this spider is mega. It’s about as handsome as a spider gets, it's big and now it’s officially a member of the British fauna again. The rediscovery of the Great Fox-Spider is indeed the most exciting thing to happen in wildlife circles for quite some time. Glad it’s in safe hands".

“The Great Fox-Spider has not been seen since 1993 in Surrey and is at the very edge of its range in the UK, which accounts for its super rarity here. This formidable-looking creature is an impressive beast, perfectly camouflaged and also largely nocturnal, and for all its size it has been remarkably elusive.

He added: “I am naturally over-the-moon to have finally proved the continued existence of the Great Fox-Spider in the UK. Although I’ve always held a latent interest in spiders, as a bona-fide arachnologist, I am still a relative newbie, so am doubly pleased to have made this important contribution to our scientific knowledge.”

“Many people are unaware of the size and diversity of the Defence estate and its tremendous wildlife richness. It has generally been protected from agricultural intensification and urban development, so it now provides a vital sanctuary for many of the country’s most rare and endangered species and habitats. We are proud to hear that the Great Fox-Spider has survived because of MOD’s commitment and enthusiasm to have positive and active conservation management on the Estate and close integrated working with ARC, Surrey Wildlife Trust and MOD Conservation Groups.”

‘The discovery of the Great Fox-Spider shows how amazing the MOD heathland is, not just for spiders, but also for Sand Lizard, Smooth Snake, Dartford Warbler, Nightjar, Silver-studded Blue butterfly and Marsh Clubmoss. The spider’s rediscovery is a wonderful exoneration of all the incredibly hard work put in by MOD staff, Conservation Group members, ARC staff and volunteers.’

ARC has managed key parts of the site since 1974, with particular emphasis on preventing the endangered Sand Lizard from becoming extinct, and as MOD’s conservation partner, ARC has been managing much of the open heathland on the site since January 2019. Managed for nature’s recovery, the MOD site is recognised as being nationally important for its populations of rare bird, reptile and invertebrate species.

For shelter the Great Fox-Spiders dig burrows or holes under rocks and logs and make a silk-lined burrow as a retreat for the winter. Mike Waite now plans to continue his study to gauge the size of the population.