During the winter months, large numbers of starlings visit Britain from the continent, seeking out the relative warmth of our island climate.

The murmurations usually start again around November, after the birds have all returned from their breeding sites and begun to gather as a flock again, but can sometimes be seen from as early as September. Numbers usually swell in December/January as migrant birds join our resident flocks for extra safety and warmth. 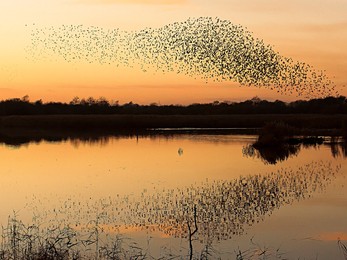 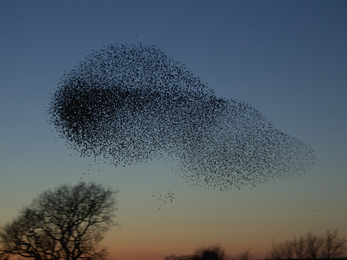 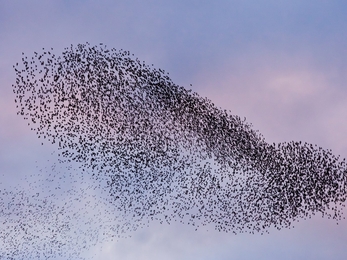 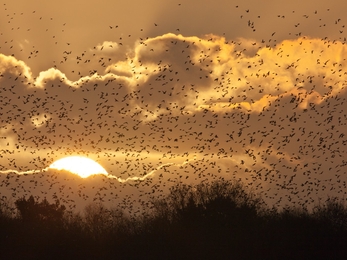 What is a murmuration?

As dusk arrives, flocks arrive from all directions, gathering in the skies above their roost sites. As the numbers reach into the tens and hundreds of thousands, the ‘murmurations’ (the name for a flying flock of starlings) take on incredible shapes in the sky, contracting and expanding as one flock merges into another, and taking on a life of their own; swirling back and forth in ever more complex and beautiful patterns.

The best time of day to see them is just as the sun is setting.

Why do murmurations happen?

From warmth to exchanging information, there are many theories about why starlings flock together in such large numbers. However it is widely believed that the main reason is safety in numbers.

If you are lucky enough to see a murmuration you may also notice sparrowhawks in the sky. These predators try catching the starlings, which causes the murmuration to condense and change shape incredibly fast. Sparrowhawks are rarely successful when the starlings are in such large number as it is so difficult to choose one bird to target in the middle of a hypnotising flock.