© Sand in Your Eye

Surrey Wildlife Trust has unveiled a giant 20-metre wide sandcastle for sand martins, tiny 12 centimetre brown and white birds, to welcome them back from Africa to nest at a Surrey nature reserve.

The huge 400 tonne sand installation will provide hundreds of new sand martin homes at the reserve for the first time in 25 years.

As one of the first spring migrants, sand martins, the smallest of Britain's swallow and martin family, visit the reserve annually on their return flight from sub saharan Africa. The nesting bank, in essence, one enormous sandcastle, has been specially designed with a 20-metre curved vertical face so sand martins can peep out of nest holes to find mates.

Sand martins begin to arrive at Spynes Mere, near Merstham, mid-March and feed there until September. The nest bank is a home for sand martins to rear their next brood of chicks. With their tiny clawed feet, the sand martins dig 50-90 centimetre long burrows into the vertical face and make a small chamber at the end, where between four and eight eggs are laid on collected vegetation and feathers.

James Herd, project manager at Surrey Wildife Trust, said: ‘Sand martin numbers have plummeted twice in the last fifty years as a result of droughts in their wintering grounds in Africa.  In the UK, the natural nesting inland habitat along river banks has decreased as rivers pass through more urbanised areas and under roads, and quarrying has ceased.

‘So creating this nest bank is important to protect them against the boom and bust nature of their nesting sites and give more security for the population to expand.  They are sociable birds that roost together in large numbers and so the scale of the sand bank is as important as its sustainability. Here at Spynes Mere the sand martins can return to nest safely in the sand bank year after year.’ 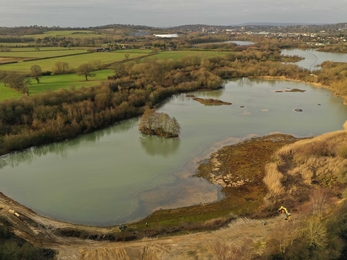 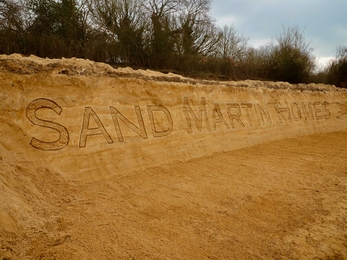 © Sand in Your Eye 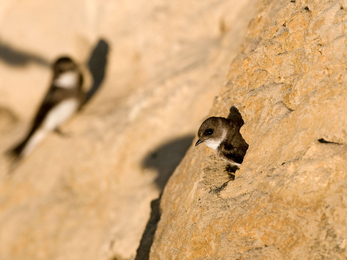 The naturalistic solution is similar to building a sand castle on the beach with a bucket and spade, just on a grand scale. So Surrey Wildlife Trust worked with professional sand sculptors, Sand in Your Eye, to create several 1.8 metre test sandcastles in mid-January to see if the sand held its shape before they began the ‘Grand designs’ build in February.

Jamie Wardley, sand sculptor and director of Sand in Your Eye, said: ‘Sand sculpture is beautiful and natural land art which blends in with the natural landscape and can be created on a large scale. So it is a perfect medium for nature conservation. There is a lot of clay in the sand at Spynes Mere, which is really good for helping the sand to hold its shape.

‘We have only used sand from the site to create the 20 metre long by 5 metres deep and 1.8 metre high structure from a giant bucket mould made from wooden boards. We added water to create the right mix, compacted the sand, and three to four weeks later the boards were removed. The new ‘des res’ is now ready for sand martins to move in, leaving nature and the sand martins to do the work of sculpting hundreds of nesting burrows.’

The reserve was originally created from a restored sand extraction site, which is part of the Nutfield Marshes complex of wetland reserves. Sibelco, land owners, has supported the conservation project by clearing the bank of scrub on the new nest bank site, as well as offering extra man-power, diggers and dumper trucks for the test and main sandcastle builds.

Nick Allman, site manager at Sibelco, said: “Sand martins like to nest in active extraction sites because they like the fresh, clean, vertical sand faces. But this can cause problems for Sibelco because if they are found then we have to stop work in that part of the quarry. The sand martin bank is a way of naturally drawing them away from the active sites to where it is safer for them to nest.’

New vertical faces carved out of the natural sandscape and the nest bank together provide 100 square metres for sand martin homes. Up to a metre of the sandbanks will be shaved off the face annually to reduce the burden of nest parasites. After five or six years, the sand can be recycled and the bank rebuilt so it provides a lasting home for the sand martins for the future. The natural sand bank also offers habitat for invertebrates such as solitary bees and wasps.

The project has been funded by a local growth investment fund, Coast to Capital, as part of the Naturally Richer project, and supported by Chessington World of Adventures Resort’s Chessington Conservation Fund.

Help us do more for wildlife in Surrey

Calling all young environmentalists who want to stand up for nature!